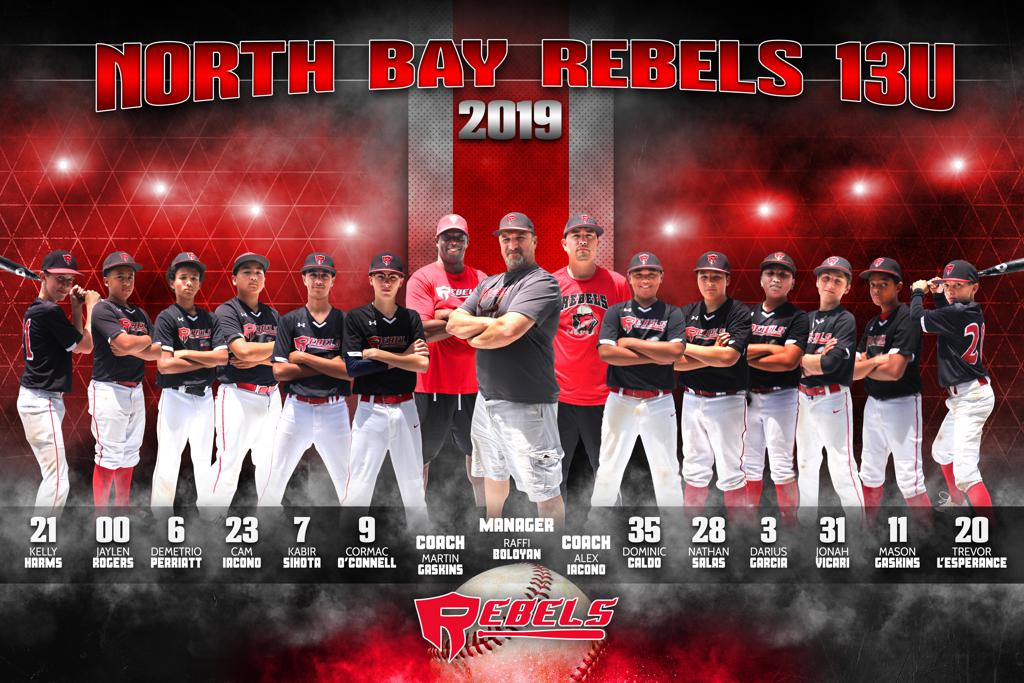 Thank you to Brian Vicari for photography and Arc4Studio for the creation of the photos. 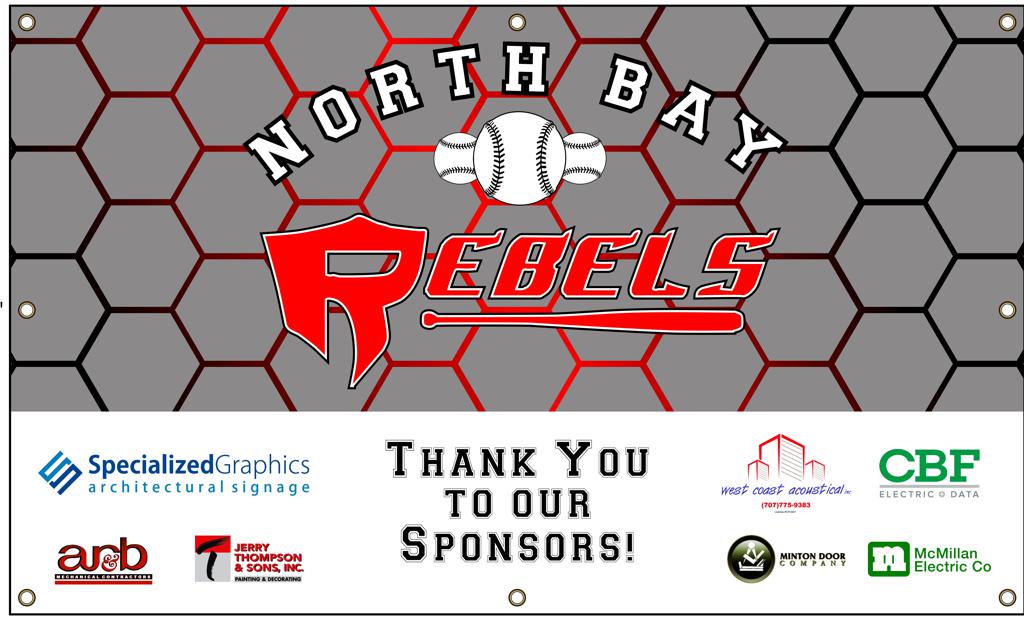 The Rebels 13u team ended their year with a bang, winning their last two tournaments.

On August 25-26, 2018, the 13u boys competed in the All World "Line Drives" Tournament in Petaluma, and went 5-0 for the weekend and won the championship, beating Hand Picked Baseball 9-5 in the championship game.

On September 8-9, 2018, the 13u team headed back up to Petaluma and played in the All World "Slug Fest" Tournament and went 4-0 and won the championship, beating Athletic Edge (Navy) 11-3 in the championship game.

The 13u team will now shut down for the fall and winter and take a rest and do other things. The team will pick back up in Spring 2019

Rebels end 12u season making it to Championship game

The Rebels 12u team came off a 3 week break after their Cooperstown trip to play in their last tournament as a 12u team on July 29-29, 2018. They played in the All World  "End of Season Finale"  tournament at Mission College in Santa Clara.

On Saturday, they played two games in pool play. In the first game, they beat the Aldrete Baseball 17-0. In their second pool play game, they lost to the Oakland Wolves 6-0. The 1-1 record earned them a #3 seed going into bracket play on Sunday.

Sunday, the Rebels beat #6 seed The Show 9-2 in the quarterfinal game. They then moved on to play #2 seed All American Baseball in the semi final game and ended up winning 13-10.

Great 1st tournament back for the Rebels boys, following their 3 week summer break after Cooperstown.

13u team getting ready to play ball on Feb 10th

Rebels 13u is gearing up to start their season on Feb 10th. Their first game will be Feb 17th, when they start playing in a spring league, put on by Athletic Edge of Napa

Rebels 14u Compete in Last Tournament of Season

The Rebels 14u team played in their last tournament of their season this past weekend, playing in the TPR "Bear Flag Weekend" tournament in Walnut Creek.

Boys had a solid day on Saturday. In their two pool play games, they went 2-0 and only allowed 2 runs scored. In their 1st game Saturday, they beat the East Bay Bandits 17-2 and in game 2, they beat the Aptos Aces 11-0. The 2-0 record, with only 2 runs allowed earned them #1 seed going into bracket play on Sunday.

On Sunday, they played the #4 seed Athletic Edge Blue in the semi final game and ultimately lost 9-5 in 2 extra innings.

Overall, another solid performance on the field for the 14u Rebels, who ended going 15-4 in their last 5 tournaments of the year. The 14u season is now over and this marks the end of the 14u team, as nearly all the boys are in high school and will be playing with their high school teams next spring and summer.

Rebels 14u took to the field again this past weekend, 8/17-18, playing in the TPR "Dog Days of Summer" Tournament at Big League Field of Dreams in Manteca. Boys ended up earning #2 seed after pool play and lost in the semi final game. They went 3-1 for the weekend.

In their two pool play games on Saturday 8/17, they faced the Al Sports Dawgs 14u and won handily 17-5 and  in game 2, they faced The Yard 14u and ended up winning in a close battle. The Rebels took a 5-0 lead in the bottom of the 2nd. The Yard came back and tied the game. 5-5 in the top of the 4th. The Yard then scored 2 more runs in the top of the last inning. Rebels were home team and took advantage of their last at bat, walking off with a 807 win off the bat of Big Nate S #28

The 2-0 record, with 11 runs allowed earned them the #2 seed doing into bracket play on Sunday.

In the quarter final game Sunday morning, they played faced #7 seed "The Town 14u" and won 11-1, advancing to the semi final game

Overall for the weekend, the boys went 3-1 and have gone 13-3 in their last 3 tournaments.

Boys have one last tournament, before they shut it down for the year. Their last tournament will be on 9/7-9/8/19, when they play in the TPR "Bear Flag Weekend" Tournament in Walnut Creek.

Over the next couple of weeks, they will continue to practice and get a few scrimmage games in to stay sharp

On August 1st, the Rebels 13 boys aged up to a 14u team and on August 3-4th, they played in their 1st 14u tournament. The boys showed up strong, once again, and won the All World "Gold Glove" tournament in Mather. For the weekend, they went 4-1, giving up 17 runs in 5 games, while scoring 25 runs.

On Saturday 8/10, they beat CA Prospects/Team Rawlings 5-2, then beat Delta Breeze 6-1. Sunday 8/11, they finished the rest of their pool play games, beating Olney Baseball 5-3 and losing their last game to Elk Grove Outlaws 6-1.

With a 3-1 record in pool play, they earned the #1 seed and faced #2 seed CA Prospects /Team Rawlings in the Championship game. It was a hard fought game, that saw 5 innings of low scoring. With the score tied 2-2 in the bottom of the 5th, the Rebels finally broke through and scored 6 runs in the bottom of the 5th, to take a 8-2 lead. They gave up 3 runs to the Prospects in the top of the the and that was enough to win the game 8-5 and bring home their second championship in the last month

The boys take the field again this weekend, 8/17-18, playing the TPR "Dog Days of Summer" Tournament in Manteca/Ripon